UPCOMING EVENTS:
Gloriæ Dei Cantores presents one of the world’s classical masterpieces, Mozart’s Requiem, as well as a hidden gem, Britten’s The Company of Heaven, in celebration of the Feast of All Saints. Led by Artistic Director and Principal Conductor Richard K. Pugsley, this concert will be performed with full orchestra and world-class guest soloists Martha Guth, Soprano; Kathryn Leemhuis, Alto; Aaron Sheehan, Tenor; and Andrew Nolen, Bass. Concerts will take place October 28 & 29 at the stunning Church of the Transfiguration at Rock Harbor in Orleans, Massachusetts (on Cape Cod). This concert is sure to be a highlight in New England for classical music and fine arts lovers.  Click here for more details.
You can also follow Gloriae Dei Cantores on Facebook and Twitter. 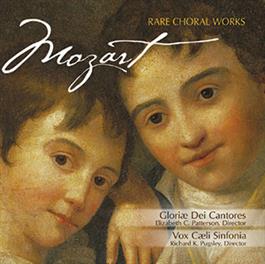 In a relatively short life, Mozart achieved “musical immortality” through an astonishing variety of responses to musical form and the human condition, through an unwavering adherence to classical ideas, and through an indomitable spirit that led him through difficult times despite his human foibles.

It is well known that Mozart was a precocious child with musical gifts beyond imagining, and his father Leopold toured him around the great courts of Europe. It was during one of these visits that Mozart’s incredible ear was discovered: after he listened to a performance of Allegri’s Miserere in the Sistine Chapel, he transcribed it perfectly onto manuscript paper.  Because this particular music was a closely guarded composition for the Vatican, Mozart’s transcription was kept under lock and key for no one else to see. Despite the grueling conditions of touring, Mozart gathered serious elements of sacred composition during this time from people like Padre Martini and other fine teachers in Italy.

What is likely not so well known is that Mozart also composed a substantial amount of sacred choral music in his lifetime, much more than the popular Requiem and Mass in C minor.

Misericordias Domini was written by Mozart while employed as a court musician in Salzburg, 1773–1777. During a trip to Munich in early 1775 to hear a performance of his opera Lafinta giardiniera, Mozart received a request from the Elector Maximillian III Joseph of Bavariato write contrapuntal music. Mozart accepted the challenge and set the liturgical text of Misericordias Domini to a single-movement chorus. With a spare orchestration of just strings and continuo, Mozart wrote this masterpiece of polyphony and counterpoint based on a single line of text. He alternates homophony and polyphony in the choral writing, while the orchestra interjects and supports the endless variety of musical and rhetorical responses to the text. The work alternates between the soft, solemn refrain of “Misericordias Domini” and the loud, more animated and melismatic polyphony of “cantabo in aeternum” (“I shall sing forever”).  There are strains of a familiar tune within Misericordias Domini which many consider a foreshadowing of the final movement of Beethoven’s Ninth Symphony commonly referred to as “Ode to Joy” written in 1824, 33 years after the death of Mozart.  (from the Concert Program notes for Gloriae Dei Cantores concert, July 2014)